Jane Boand, President
Jane Boand is a 33-year resident of Douglas County, and is a founding member of the Douglas Land Conservancy. She became interested in land trusts as a tool for helping landowners preserve open spaces for wildlife, agriculture and open space during graduate school at CSU. Jane and her husband Steve live south of Castle Rock on a small ranch, growing hay and raising goats, chickens and fostering formerly wild BLM burros. Jane is also actively involved in recycling efforts in Douglas County.

Dan Danser, Vice President
Dan Danser is a Castle Rock attorney specializing in dispute resolution, business and real estate law.  He is a graduate of Princeton University and New York University School of Law. After beginning his legal practice in New York City, he has lived in Colorado since 1982.He is a past president of the Castle Rock Lifelong Learning Center, Rotary Club of Castle Rock and Academy Charter School, a director of Douglas County 4H Foundation, and an avid mountaineer, rock climber, gardener and beekeeper.

Alan Clarke grew up wandering the fields and forests of upstate New York. He received a B.S. from Duke University and a M.S. from the University of Colorado, Boulder, both in Civil Engineering. Professionally, he works as an aerospace engineer, helping to ensure success for a wide variety of satellite and launch vehicle missions. Alan is a Life Member of The Nature Conservancy. Since 2000, he has lived in Perry Park, Douglas County. A favorite past-time is hiking the high mountains with his daughter.

Christine Arthun
Christine and her husband moved to Colorado in 1987 and have lived near Franktown in Douglas County since 1989. Before retirement Christine was the Corporate Director of Disaster Preparedness/Response/Recovery for the largest midstream energy company in North America. She was also a member of Wildlife Habitat Council, a non-profit that promotes and certifies habitat conservation and management on corporate lands through partnerships and education. She has been a volunteer with Douglas Land Conservancy since 2014 and became a board member in 2017. Christine feels a spiritual connection to the earth, and thus is passionate about preserving natural habitats for wildlife, birds, and native plants.

Richard Bangs has worked in Castle Rock since 1986 and is now retired from Castle Rock Bank as an Information Technology Assistant in the Information Services department. He was born, raised and educated in Montana, earning a BA in journalism from the University of Montana in Missoula. He worked on a variety of newspapers in Montana, Wyoming, Colorado and Australia, ranging from community weeklies to metro dailies.He came to Castle Rock in 1986 and worked for the Douglas County News-Press for 14 years as an editor and manager. He also was manager and part owner of the Castle Rock Daily Star between September of 2002 and December of 2004.Bangs joined the Douglas Land Conservancy Board of Directors in 1992. He lives in Littleton, CO with his wife Susan.

Tom Barenberg
Tom Barenberg is a Colorado native. He has been a resident of Douglas County for 26 years.  In 1974 Tom founded Split Rail Fence and Supply Company.  Today, the company is the largest independently owned fence company in Colorado with a wide range of distribution-including retail, wholesale, and commercial sales and installation.Over the years Tom has been involved with many charitable activities; notably the Boys and Girls Club of Denver and the Boy Scouts of America.  He also provides financial support to many other entities including Meals on Wheels, Dumb Friends League and the Denver Rescue Mission.Tom and Split Rail Fence are active participants in the Home Builders Association of Metropolitan Denver (HBA), American Fence Association (AFA) and the Better Business Bureau of Denver (BBB).  He has been a president and board member of the AFA and a past board member of the HBA.

Jim DeLay
Jim DeLay is the President of Flying Horse Catering based in Castle Rock, Colorado.  This is a full service catering company that has been serving the Front Range of Colorado for over 13 years. With the help of a great staff, Jim was named Business Person of the Year in 2006 by the Castle Rock Chamber of Commerce.Originally from Washington DC, Jim’s family moved to Colorado in 1972.Jim graduated from the University of Colorado in Boulder.  Married to wife Patti in 1982 in Castle Rock, the DeLays have been part of Douglas County for 24 of the last 26 years.  They have 3 daughters who all attended Douglas County Schools and the University of Colorado.Jim is currently on the board of the Douglas County 4H Foundation along with the Douglas Land Conservancy. Previously, he has served on the Castle Rock Chamber of Commerce board along the Douglas Elbert Task Force (local food bank).  Also, Jim and his wife have been active with the youth groups at Saint Francis Catholic Church in Castle Rock.

Jessica Fenske
Jessica Fenske moved to Larkspur in 1990 at the age of 6 when her family relocated from Chicago. She grew up right on the edge of Sandstone Ranch and the Pike National Forest, spending as much time outside as possible exploring the forests and land. Now she is a real estate broker with a mission for land conservation and protecting the beautiful environment in Douglas County and other areas. Jessica has volunteered with the Douglas Land Conservancy since 2016 and became a board member in 2018. She is also a volunteer with The National Western Stock Show Association and a member of the Larkspur Historical Society.

Cindy Harlan
Cindy moved to Colorado with her family in 1972, first spending 30 years in Littleton and the past 17 years in Douglas County. She studied communications at Regis University, and now with an established career in Telecom Management, manages projects that build and enhance the fiber network in Colorado and neighboring states.  Passionate about spending time outdoors she believes time in nature is good for the soul.  One of her favorite things to do is hike the wonderful Open Space trails of Douglas County and the surrounding areas. Cindy’s other pastime is riding horses.  She has been an avid horseman for the past 25 years enjoying dressage and trail riding.    Beyond this, Cindy loves to spend time with her family, especially her three grandchildren.  She is a member of Castle Rock Center for Spirituality, CenturyLink Woman, and Volunteers of America.  Cindy has volunteered with Douglas Land Conservancy since 2013 and joined the board in June 2015.

Rich grew up in the south suburbs of Chicago with a love of the outdoors instilled from hunting and fishing with his dad. Rich was an Eagle Scout and after college, his first job was as a District Scout Executive for the Boy Scouts of America. He earned a master’s degree and spent his career in Human Resources for General Foods, Northern Telecom, Coors Brewing Company, and United Rentals. Rich has lived in Castle Pines with his wife Ronnie since 1988. Now retired, Rich has time to pursue his love of landscape photography, recently shooting the Aurora Borealis in northern Alaska. Rich became aware of DLC through the hike program and has served on the Board since 2018. Being out on the land with DLC reminds Rich of the special times he spent walking through fields while hunting with his dad and those first memories of the outdoors.

Mike moved to Colorado in 1973. Coming from the city of Detroit, he had no real concept of open space, so instantly fell in love with Colorado. He became an avid backpacker and mountain biker, and was a volunteer interpretive ranger at Rocky Mountain National park. He and his wife became blue bird monitors for DLC in 2018, and Mike was increasingly attracted to the mission of DLC, joining the board in 2020. Mike was a senior executive in the non-profit behavior health industry for many years, and is finishing his career in Executive Coaching and Development. As a coach, Mike has met with client companies in South Korea, Singapore, Istanbul, Prague, Abu Dhabi, Dubai, as well as 38 US states and Canada. He holds degrees in the behavioral sciences from the University of Michigan and the University of Denver. He and his wife Chris live in Perry Park, along with their Goldendoodle, Sam.

Doug is an ecologist who has conducted environmental assessments for projects in Africa, Southeast Asia, South America, and the Caribbean and throughout the United States. He has edited a book on tropical rain forest ecology and published 40+ scientific papers on environmental topics. Doug and his wife, Julie, have resided in Castle Rock since 1977. 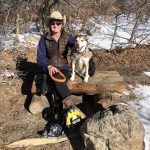 Sharon Sjostrom
Sharon Sjostrom has lived or worked in Douglas County most of her life and currently lives west of Castle Rock near Dawson Butte. Sharon has an MBA and Master of Science degree in Mechanical engineering and has spent a career developing and implementing air pollution control technologies currently used throughout the world. Because she has seen tremendous growth in the county over the years, and the corresponding changes in the agricultural and natural characteristics of the area, she knows the importance of preserving the incredibly valuable heritage of open lands for future generations. She is active in the Rotary Club of Castle Rock, volunteers with the Douglas Land Conservancy and the Colorado Agricultural Leadership Foundation and serves on the Advisory Board for the CSU Energy Institute.

Elizabeth Taylor
Elizabeth and her husband Curt have lived in Colorado for the past 29 years and have learned to love all of the different habitats in our adopted home state. Elizabeth has a Master of Science in Wildlife Management and is also a certified Colorado Native Plant Master. Since her retirement six years ago, she has been a volunteer naturalist for Douglas Land Conservancy, Douglas County Open Spaces, and Cherokee Ranch and Castle Foundation. Elizabeth expresses her passion for land stewardship through volunteer activities such as leading nature hikes, monitoring bluebird houses, and presenting programs on wildlife species. One of her most important missions is helping young people learn to love nature and understand the importance of protecting wildlife and preserving open space. She is focused on ensuring that future generations are prepared to continue the land conservation work we are doing today.