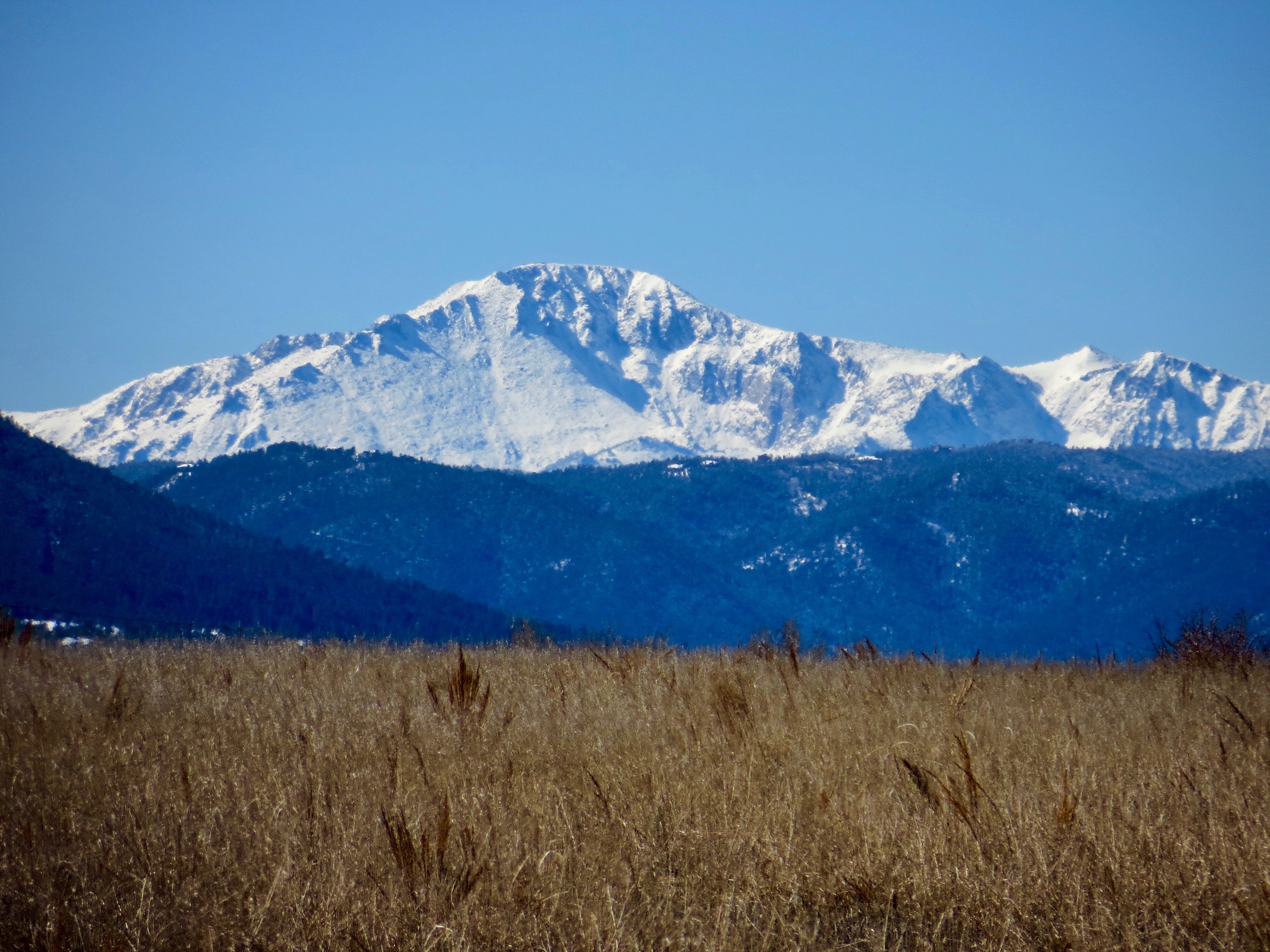 It was relatively warm for a late Fall morning with brisk southwest winds, bright Colorado sunshine, and blue skies. The forecast said the wind would shift to northwest in the afternoon bringing much colder temperatures as a prelude to a powerful short-lived blizzard by evening. So, a mid-morning walk seemed like a good idea for a couple of reasons; it wouldn’t be much fun later and I loved the exhilaration carried by the wind when its power has full access to bluster my bones.

Douglas County Open Space offers trails in several parks with mesas perfect for the wind to have its way with me. What a delight it is to live where such scenic, unspoiled amenities are available! I chose the regional park closest to our Castle Rock home and began walking the trail. Although its switchbacks traverse the leeward side (east) side of Rhyolite Mesa, strong eddy currents brought frequent reminders that the top would be a wild place. I was eager to be up there!

Reminiscing often occupies my mind while walking. I was a century late to see whether there had ever been trees atop Rhyolite Mesa. If there were, the quarry activities of long ago had removed them, leaving a grass covered plateau with knolls of overburden and rubble left behind. The sign at the trailhead noted that a narrow-gauge railroad had even been built to the mesa top to carry the rock to market. Rhyolite was once a favored building stone noted for its attractive appearance and relatively light weight. Much of Castle Rock’s early economy was rooted in the rhyolite business, which once involved several quarry operations on mesa’s in Douglas County.

As the trail approached the top on the northeast side, I could hear the wind before I felt it. As I crested the plateau, it almost knocked me over with its velocity and gustiness. It changed directions as often as a rodeo bull so there was no way to lean into it for stability. Keeping my feet required constant vigilance, so the expansive views in all directions had to wait for me to intentionally stop and brace myself with my walking pole. The forecast had said 30-40 mph winds with gusts up to 60. They were at least that. Walking around the north edge of the mesa the wind kept escalating, until my progress must have looked like an over enthusiastic drunk guy trying to stay upright after a night of bar hopping with no budget and a designated driver. The west edge was utterly tumultuous with gusts as wild as I ever experienced while hiking above timberline in monsoon thunderstorms in Colorado’s high country. Fortunately, it was much less scary with no hail or lightening. I continued around the mesa’s perimeter until I finally reached the northeast corner and started back down. It was relaxing to descend in the leeward shelter of the mesa savoring my walk on the wild side.

After a hard fall while hiking in the Sangre De Christo mountains last summer, I had given away my backpacking gear and felt a big hole of grief that reaching my mid-70s meant no more extended trail hiking in my beloved mountains. It had been a cherished part of who I was for decades. I had even been avoiding walks on unpaved surfaces for some months. So, today’s boxing match with the wind was a gift beyond measure. It felt SO good to be once again on a dirt trail uneven enough to make me watch my footing. I have never been more grateful for the natural beauty of Douglas County and Colorado. Thank God that Douglas County has had the foresight to preserve open spaces for public access to experiences like this day’s walk. Life would feel immeasurably smaller and limited if I was cut off from connection with the land and all its various moods. For me this walk was an infusion of life energy that I truly needed. This is why I volunteer with Douglas Land Conservancy and am so grateful for our county’s open space programs. Life blesses me and it is good!