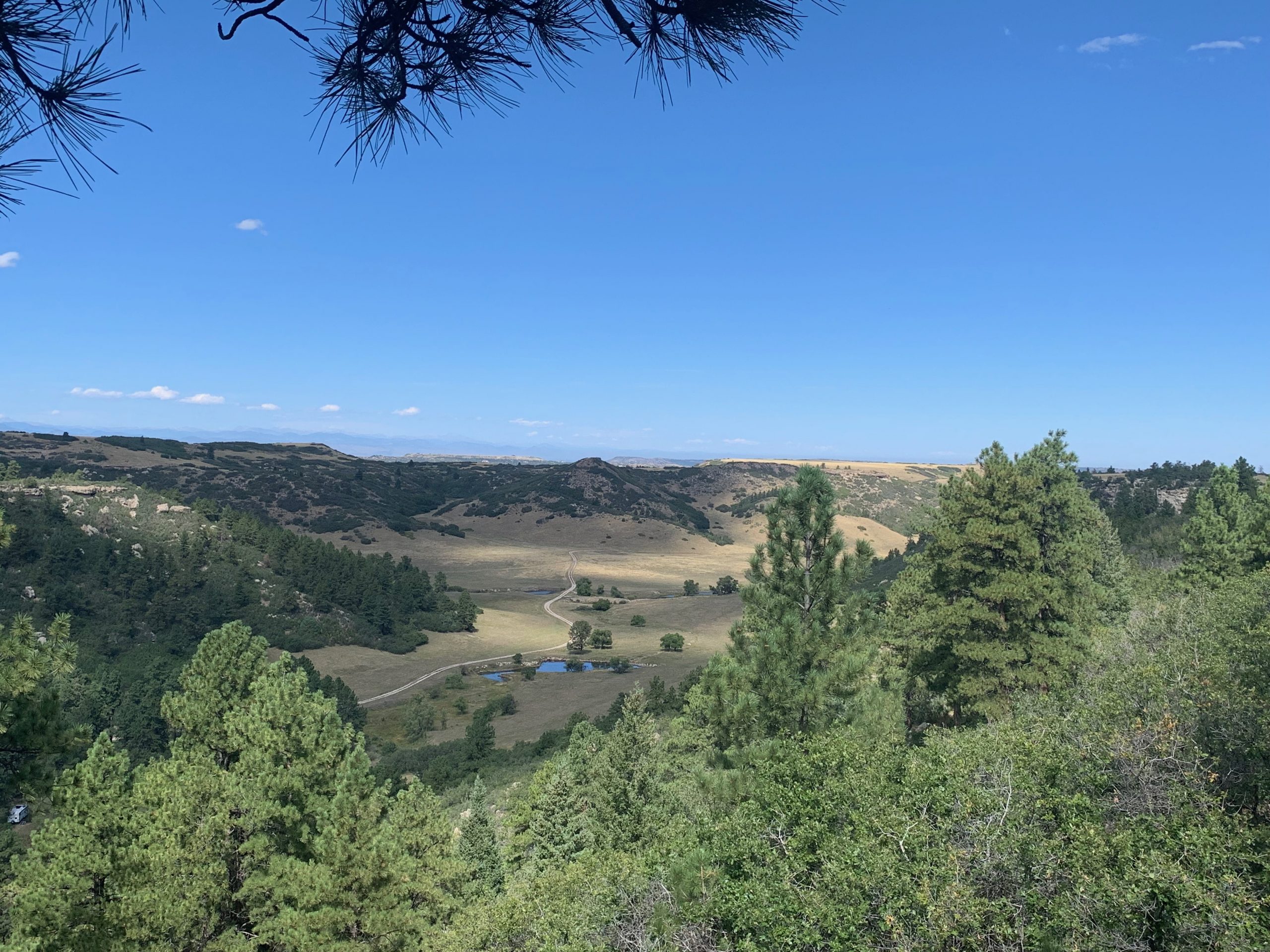 One of Douglas County’s most historic ranches is now protected with a conservation easement made possible by County taxpayers, County Commissioners, The Conservation Fund, Douglas Land Conservancy (DLC), and the owner of Ditmars Ranch.

The 1,500-acre property was identified 25 years ago as a conservation priority in the South I-25 Conservation Corridor study, completed by the County and The Conservation Fund. The property features a lush evergreen forest, as well as shrublands and grasslands, habitat for elk, mule deer, pronghorn, black bear, mountain lion, and bighorn sheep. “The property qualifies as open space because it is being preserved for the scenic enjoyment of the general public and will yield a significant public benefit,” states the Deed of Conservation Easement.

“I am so incredibly grateful for the conservation easement program that will forever protect our ranch from development and preserve the wildlife and ecological environment forever,” said Don Ditmars, whose grandfather originally purchased land in the valley in 1892. Although the property remains in private ownership, the conservation easement will accommodate public access via four guided public events per year. The property will continue to be managed as a working cattle ranch.

“We very much appreciate the generosity of the Ditmars family, which resulted in the permanent protection of their ranch. This critical addition to lands, already preserved in the South I-25 Conservation Corridor, now totals more than 35,000 acres,” said Justin Spring of
The Conversation Fund.

“Our citizens and taxpayers had a significant role in this achievement with the 1994 voter passage and reauthorization in 1998 of the Open Space Sales and Use Tax,” said Roger Partridge, County Commissioner and Board Chair. “This dedicated revenue stream for Open Space acquisition and management created a catalog of properties representing one of the most prized attributes our County offers its citizens,” he said.

We are thrilled to be part of this collaborative effort to preserve Ditmars Ranch. Without Mr. Ditmars’ conservation interests and the conservation partners that came together to make sure the property was preserved, another piece of the unique character of Douglas County may have been lost. DLC is excited to begin fulfilling its role of ensuring that this land is protected forever,” said Patti Hostetler, Executive Director. 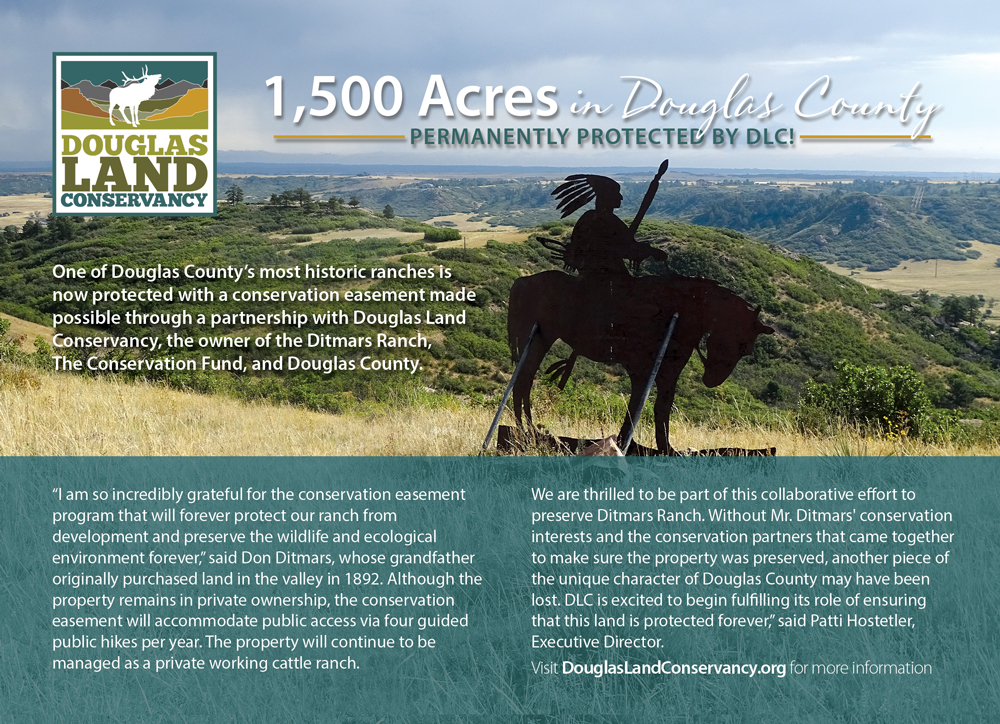 A bit of history on the newly protected Ditmars Ranch…

As submitted by Don Ditmars –

My grandfather Samuel Riker Ditmars was born in 1864 on Long Island in New York. He spent an adventurous and dangerous youth. At the age of 15 he ran away from home to Montana where he worked on a cattle ranch. He earned enough to have his own horse and saddle and a cash stake. He traveled around the west and had a variety of jobs and finally ended up in Denver where he owned a meat market and livery business.

By 1892 his business was successful enough that he needed to expand his horse business so he bought 500 acres near Castle Rock that he named the Evergreen Ranch. In 1900 he married Annie Josephine Linklater whose family had a small farm east of my grandfather’s property. He continued to buy up small homesteads until the ranch reached approximately 3,000 acres. He raised horses and Herford cattle and built a successful ranching operation.

My dad’s sister Mary was born in 1902 and my dad in 1909. On April 30, 1924, my grandfather was wounded as an innocent bystander in a shootout between escaped felons and Arapaho County deputies that left him partially paralyzed and unable to maintain the ranching operation. My dad and grandmother took over operation of the ranch at that point and managed to pay off mountains of debt from the medical bills incurred from my grandfather’s care.

My grandfather died in April of 1927. My father, his sister and my grandmother operated as partners from that time on with my father occupying the ranch and his sister and mother moving to Englewood.

My father married Bertha Elizabeth Nickson and I was born in 1941. I am eternally blessed to have been able to live and grow up in one of the most beautiful places in Colorado. I spent my childhood going to school and coming home to a list of daily chores, including gathering eggs, milking our one milk cow, doing homework and anything else my folks thought I was able to do.

Summertime was spent helping with the farming and cattle operations. Dad taught me how to operate a farm tractor by the time I was 12 years old. We raised a variety of crops on about 40 acres of what is now becoming a high density housing development. The whole ranch was surrounded by barbed wire fencing and cross fences separating pastures. These were a constant source of repair.

As the driveway was three miles long, my mom would drive me and my brother to meet the school bus at the county road until I got big enough to reach the petals then she gave us her mother’s 1936 Ford car that she no longer could drive so we could get to the bus by ourselves.

Dad taught me to hunt, fish, maintain the equipment, fix my cars, treat people with respect, help your neighbor and a wealth of other life lessons. My mom was just as influential in my upbringing as my dad. She also hunted, fished and helped with everything else. She would help with the farming during the day until we got off the school bus then she would turn the tractor over to me and she and my brother would go home to fix supper and do the evening chores.

We never had a wealth of financial rewards but lived fairly comfortably and always managed a trip or two to the mountains or to visit relatives. We raised most of our own food in a big garden and a beef steer was set aside for meat, supplemented with some deer and antelope during those seasons.

As I grew older, I naturally developed other interests besides farming, one of which was construction. A man leased the old stone quarry south of Castle Rock on part of the property that is now part of the subdivision. I thought that would be interesting and went to work for him. That was supposed to be something to do until I figured out what to do with my life! Little did I know that it would become my source of living for the next 40 years. I added all forms of masonry construction to my skills and built a good business. The material in that quarry played out and I moved my operation to another quarry a few miles east.

In 1983 a development company approached my dad about selling approximately 1,400 acres of the north part of the ranch. As my dad was in his middle 70s, and no longer had my help on the ranch, he decided to let it go. Although this property does not possess the incredible beauty that the property covered by the easement does, it had its own beauty and character plus a lot of historical value. I was somewhat saddened to see it sold, however that sale fell through and dad got it back. It wasn’t long until another group approached dad with another plan that included a golf course and big lots with nice houses. This didn’t sound bad so dad once again agreed and the property was sold.

Dad has since passed away and I am now basically the owner of the property covered by the easement. For 65 plus of my 79 years, I loved and highly respected the beautiful property I was privileged to grow up and live on.

As I now spend most of my time on some beautiful land in Missouri, it really saddens me to come home and have to drive through the high-density sea of houses that now occupy the former cow pasture and plow field that I worked and loved.

I am so incredibly grateful for the conservation easement program that will forever protect the rest of the property from development and preserve the wildlife and ecological environment forever.

Thank you Nockels Family for your generous donation of open space 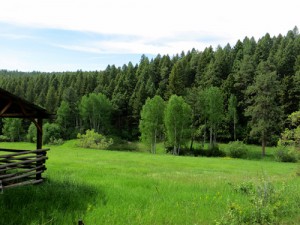 Douglas Land Conservancy is honored to accept the donation of a conservation easement by the Nockels Family on their 88 acre property west of Sedalia, Colorado. The Nockels are the third generation owners of this private property which provides valuable wildlife habitat in harmony with working forest agriculture.

In addition to these private properties, the neighboring DLC protected 308 acre Pike Hill Open Space is owned by Douglas County. This County open space is accessible by the Ringtail Trail from the USFS Indian Creek Trailhead or Roxborough State Park.

The private and public land in this vicinity protected by Douglas Land Conservancy now totals 1,100 acres. The Pike National Forest surrounds much of this land, forming a large continuous area of protected open space. 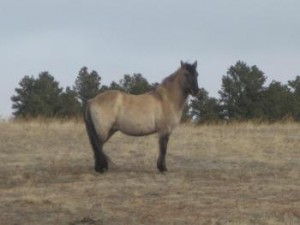 Last year Douglas Land Conservancy accepted the donation of a conservation easement on 85 acres in northeastern Elbert County known as the Sunflower Ranch. The property is owned by Paul Tanner, who donated a conservation easement on the Property. The Tanners have raised and bred Spanish Mustangs on the ranch for nearly 20 years. DLC is honored to accept an easement on this property which will protect critical viewscapes, high prairie grasslands and Pronghorn habitat. Thank you Paul and Lynn for the gift of open space! 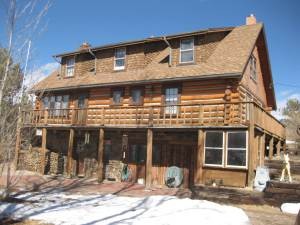 In 2011 Douglas Land Conservancy accepted the donation of a
conservation easement on 198 acres in southwestern Douglas County known as the historic Abbe Ranch. The property is currently owned by Richard and Susan Farmer who, with the help from a grant from Douglas County, donated a conservation easement on the ranch.The Abbe Ranch was the only home of James and Polly Abbe. James Abbe was a well know photographer, having photographed many stars of the silent screen. He also covered the Spanish Civil War from 1936 to 1937, opposite Ernest Hemmingway. He was the first Western photographer to photograph Stalin.

The children, Patience, Richard, and John wrote three books and were famous in their own right. The Abbes purchased the land and constructed the home with the proceeds of the children’s books. The ranch House was completed in 1938.