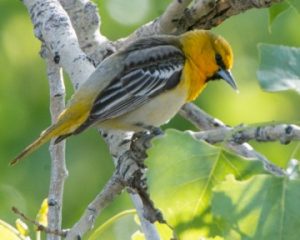 Calling all bird lovers!
From bluebirds to buntings, warblers to wrens, birding in our region is diverse and exciting.

Join Hugh and Urling Kingery, the definitive experts, on birding in our region, to learn more about the birds that call our region home and what is unique about our local habitat.

The presentation will be following with Q & A.
Additionally, Birding Colorado, The Falcon Guide available for purchase (cash or check only).

Space is limited. Our speaking engagements fill up quickly. If the event is full, please contact Amy Graziano at [email protected] or 303.688.8025 to be added to the wait list.

The speaking engagement is free, but a $10 per person or $20 per family donation to DLC is suggested. 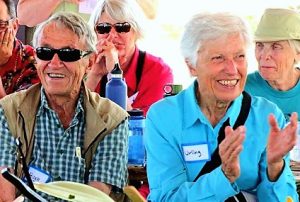 About Your Presenters:
Hugh directed the first Colorado Breeding Bird Atlas and edited the Atlas book, the “Colorado Breeding Bird Atlas”. He coordinates the Breeding Bird Survey in Colorado. He has served as President of Denver Audubon, Denver Field Ornithologists, and The Colorado Mountain Club. He acted as Regional Editor for American Birds 1972-1995. For the second Colorado Breeding Bird Atlas he volunteered as a Regional Coordinator. He wrote several Species Accounts for the second Atlas book, published last December.
Hugh wrote the 2008 Falcon guide, “Birding Colorado”, with Urling’s invaluable help. This involved a rigorous year-long regime of driving all over Colorado checking out bird-watching sites. Assistance from birdwatchers in different parts of the state meant that they received up-to-date local expertise.
Urling and Hugh have taught a beginning bird watching class twice a year since 1979 (except for a break during the kids’ Junior High School). Now offered by Denver Audubon (a/k/a Audubon Society of Greater Denver), it started as an Adult Education class at the University of Colorado-Denver. Both have volunteered for Audubon for years.
Urling chaired the Silent Auction at the ASGD annual dinner for more years than she cares to recount, as well as the Field Trips Committee. She volunteers with the ASGD Urban Ed program and the Lois Webster Fund (it supports research on Colorado birds).
Avid birdwatchers, they have posted over 9,000 checklists to the Cornell bird record site, eBird. These cover recent observations as well as historical ones to give the site a perspective on changes over the years to bird populations and distribution.