Join us for a hike or special event!   Check out our 2020 Guided Hikes and Upcoming Events Calendar …
DLC’s volunteer run book club would like to announce their next selection, Desert Solitaire, by Edward Abbey. 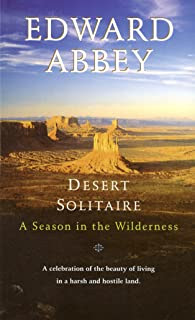 DLC’s volunteer run book club will hold our next meeting, on Tuesday, November 17 at 7pm. We will meet virtually to discuss, Desert Solitaire, by Edward Abbey.
In Desert Solitaire, Edward Abbey recounts his many escapades, adventures, and epiphanies as an Arches National Park ranger outside Moab, Utah. Brimming with arresting insights, impassioned arguments for wilderness conservation, and a raconteur’s wit, it is one of Abbey’s most critically acclaimed works.
Through stories and philosophical musings, Abbey reflects on the condition of our remaining wilderness, the future of a civilization, and his own internal struggle with morality. As the world continues its rapid development, Abbey’s cry to maintain the natural beauty of the West remains just as relevant today as when this book first appeared in 1968.
Please join us! You will receive the Zoom link when you register.
Click here to register.
Toggle the Widgetbar